The Adventures of... Archibald & Jockabeb

The series should be read order as the events in the books occur chronologically and characters play roles in several books. 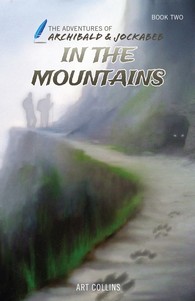 In The Mountains (Book Two)

In the first book, the two brothers meet Haktu, the young Indian brave who was trapped inside the body of an underwater dragon, and then find his lost pony, Uno, deep within a mysterious forest. After the boys narrowly escape several vicious attacks from evil wolf-crows, they receive a magic blue feather from Haktu as he bids them his final farewell. Book Two begins with Archibald and Jockabeb flying to a secluded summer camp perched high in a rugged mountain range far from home. The fact that they are the only two campers to show up at Camp Bear Claw that summer is just the first of many surprises — incredible surprises that test the protective power of their magic blue feather in completely unexpected ways. On their way to a final face-to-face showdown with a deadly creature that possesses supernatural strength, the young boys meet several unforgettable characters who end up changing their lives forever. If you liked In the Forest, hold onto your hat as you read its sequel!

In The Amazon (Book Three)

In the first two books, Archibald and Jockabeb make a number of wonderful friends while battling unearthly foes that possess supernatural powers. In a dark forest close to home, they escape almost certain death with the aid of a young Indian brave, Haktu, and his pony, Uno. Later, in a distant mountain range, they come to know the kindness of Gran, Ben, Tommy Two Feathers, and their four-legged companions, Champ and Ghost Rider. Stalked relentlessly by the blood-thirsty wolf-crows in the forest, and then by the cunning devil cat in the mountains, the two brothers manage to barely escape with their lives. However, when they accept their uncle’s invitation to visit him in Brazil, little do they know that their most terrifying adventure is about to unfold — an amazing adventure that will again test the magical power of Haktu’s blue feather. So, as you prepare to read In the Amazon, get ready for an unforgettable journey into the dark recesses that lie between the crevices of reality and fantasy! 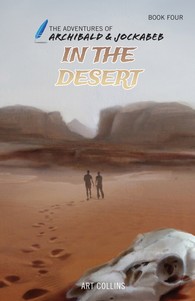 In The Desert (Book Four)

Having miraculously escaped from the clutches of supernatural wolf-crows, a seemingly indestructible devil cat, and a giant black jaguar that had been possessed by a depraved shaman, the two brothers board a bus and head toward California on a school field trip. What happens to them in the middle of the night at a deserted cafe begins another hair-raising adventure — an adventure that places them squarely in the middle of an ancient legend that has somehow come back to life in a lonely stretch of desert where untold secrets lie buried beneath the sand-swept, bleak terrain. A reclusive old man, who turns out to be at the center of it all, becomes more mysterious with each crazy twist and turn of the boys’ incredible journey into the unknown. Just when it seems that their bizarre adventure is about to end, another unexpected piece of the macabre jigsaw puzzle falls out of place, leaving two all-important questions yet to be answered — is the protective power of Haktu’s blue feather still strong, and will Archibald and Jockabeb’s string of good luck hold out a just a little bit longer? So, take a deep breath and make sure your seatbelt is fastened securely across your lap as you head into the desert! 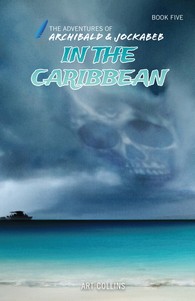 In The Caribbean (Book Five)

After leaving the deadly desert behind, the two brothers felt sure that all the supernatural creatures that had stalked them over the years were finally laid to rest. When the boys and their family board a plane destined for a tropical isle in the Caribbean, they have no idea that new danger awaits them behind swaying palm trees and beneath warm, clear-blue waters that stretch out from the secluded inn where they will be spending their spring vacation. Nor do they know that four puzzling tarot cards, the mysterious Natonto family, and a giant Haitian will all surprisingly intersect in one of their greatest adventures ever. Since the last of Haktu’s blue feather is now gone, two vital questions remain — will the same magical power be passed on to the feathers from Tommy Two Feather’s hat, and if not, can the two boys conjure up their own brand of magic to weather another impending storm? So, batten down the hatches and strap on your life jacket as you prepare for another tumultuous ride into the deep recesses of the unknown! 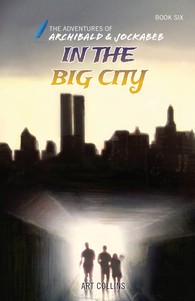 In The Big City (Book Six)

“Wow, Archibald, have you ever seen so many skyscrapers so close together in one spot?” gasped Jockabeb. “Just think of the millions of people bustling around in this city, and all the crazy things that happen here each day.” Archibald, Jockabeb, and their little sister, Tess, head off for a long weekend with their Aunt Claire in New York City, where they set about visiting the local tourist sites. Things take a disastrous turn after the boys become separated from Aunt Claire and Tess and cross paths again with the evil Tommy Nat, who almost succeeded in taking their lives in Haiti several months before. The boys’ frantic attempt to evade capture takes them to parts of Manhattan never listed on any tourist map, and leads them to a mysterious young girl named Willow, who knows the secrets of the city, both above and below ground. 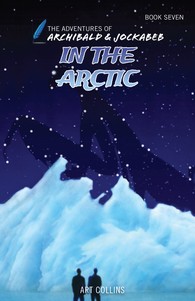 In The Arctic (Book Seven)

A barren stretch of icy tundra north of the Arctic Circle is the setting for the seventh book in The Adventures Archibald and Jockabeb series. The Paranormal Surveillance Agency, a secret government agency that tracks extraterrestrials, mistakenly believed that the two brothers had firsthand experience with ETs. That misconception arose because the boys helped destroy the Ratweil, a supernatural mutant that roamed the labyrinth of abandoned subway tunnels under New York City. When a PSA agent arrived one snowy night and requested their assistance in investigating a possible extraterrestrial landing near the North Pole, the two brothers never thought their parents would agree. Miraculously, they did! That decision landed Archibald and Jockabeb on a special task force and launched them one of their most exciting and dangerous adventures ever. It also reunited them with two members of the mysterious subterranean Moonlight Clan—Meatloaf and Willow. As they made their way to a desolate spot just south of the North Pole, the boys had no idea what they’d find when they arrived at Checkpoint Zulu. What they found there was literally beyond belief. As you begin reading the seventh book in the series, get ready for another epic battle between good and evil—a battle that will test the boys courage and sadly have a few unsuspected casualties along the way! 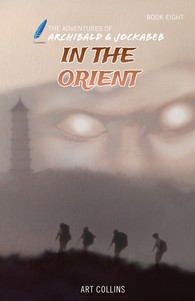 In The Orient (Book Eight)

As the eighth book in The Adventures of Archibald and Jockabeb series opens, almost six months have passed since the snowy Christmas Eve when the two brothers returned home from another astonishing adventure high above the Arctic Circle. The backdrop now shifts from the windswept tundra of the barren Arctic to the bustling Pearl of the Orient, Hong Kong. Archibald travels there to live with the Chen family and attend a summer student abroad program. At the end of the program, Jockabeb and Archibald’s girlfriend, Willow, visit him for what was expected to be a pleasant week of sightseeing. When the two brothers, Willow, and one of the Chen children head out on a mountain hike one sunny Saturday morning, they have no idea the untold danger that awaits them. After climbing a towering mountain on a nearby island, they stumble on a trapped mythical character from centuries past. That terrifying encounter sets off another life and death struggle — but this time, they can’t count on a blue feather to help them survive. Get ready for another fascinating journey into the unknown as you begin to read In the Orient. 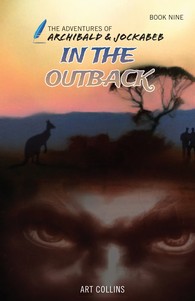 In the Outback (Book Nine)

The ninth and final book in The Adventures of Archibald and Jockabeb series finds the two brothers returning to the other side of the globe, but this time “down under” in Australia. While attending the Students’ Living Abroad Program in Sydney, sixteen-year-old Jockabeb stays with the Macalester family. He quickly strikes up a friendship with Prim Macalester, who is exactly his age. Prim is fascinated by the Australian Aboriginal culture and lore, and she tells Jockabeb about an old Aboriginal legend that turns out to be strikingly similar to some of his recent dreams.

The stage is finally set for the boys’ next great adventure when Jockabeb’s girlfriend, May Chen, accompanies her father on a business trip from Hong Kong to Sydney—perfectly coinciding with Archibald’s visit during the last week his younger brother is in Australia. The sightseeing plane trip that Mrs. Macalester arranges into the Outback for her daughter, the two American brothers, and their visitor from Hong Kong starts off well enough. However, a series of unexpected events bring the four teenagers face-to-face with someone straight out of an old Aboriginal legend.

As the fast-paced action unfolds, the reader learns a many interesting facts about Australia—from its fascinating past to the late-1980s, the timeframe during which the story unfolds. Consistent with all the other books in The Adventures of Archibald and Jockabeb series, the two brothers ultimately find themselves swept up in a classic battle between the forces of good and evil where lives will be both lost and saved.